By PeterNovember 8, 2012No Comments 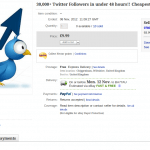 I’m breaking my own rules, so you don’t have to.

I maintain, and always have, that quality is the key component to any online community. A community of 200 people, with regular contributions from 90% of them, is a far better experience for your users, members, and clients, than 20,000 with .09% engagement.

Strong communities build strong reliances for your brand. I tell everyone this. I regularly check my online tribe to ensure it’s filled with real, engaged people.

Having said that, I just purchased 30,000 Twitter followers. I’m saying it openly, because it’s all a big test. An experiment of epic quantity.

Here’s the logic—there are all sorts of places selling bot followers for Twitter (“bot” means these aren’t real people, they only bolster your follower numbers) and just as many blog posts from people saying they’re a waste of time.

But of the two dozen bloggers I responded to, not one of them has done it themselves. I can’t get my hands on enough unbiased, experiential evidence to say for sure that they’re a waste of time.

I expect they are, I’ve always said so, but I want to be able to say it with the confidence that comes from having made the mistake first hand.

The only possible positive I can conceive of, is that there are users who might see your tweet retreated by an actual Twitter user, click your profile, and then feel assured that you’re worth following because thousands of other people already do—even though they really don’t. It’s a trick of building confidence in yourself by, basically, pretending lots of people already do see you as an opinion leader.

It’s dishonest, sure. And I still don’t think it’s any match for organic community growth. But I’ve done it now, and I’m telling you about it so it’s not quite as dishonest.