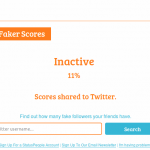 Changes are, you’ve a bunch of Twitter followers that aren’t proper followers at all—just a series of fake accounts set up to try to entice you into a spam relationship.

It’s easy to prevent getting spam from these accounts, just don’t follow them. The usual methodology of a spam account is to follow thousands upon thousands of legitimate users, and hope that some of them friend them back.

We’ve all done it, just like most of us did in our early Facebook use. “Oh, look, someone wants to be my friend. Well, I do want to get my number of friends up, because then I appear more popular and might win some non-existent perceived race to have higher numbers on my profile).

So, after deciding to not follow the spammer back, you’re safe, right? Well, not so much. For a start you’re still open to getting direct messages (DMs) from fake accounts. Plus they can still easily mention you (@yourname) which will get both your, and your friends’, attention.

But here’s the real kicker to be aware of.  It’s really easy for anyone to see how many fake accounts follow you, and therefore how many actual, engaged folloswers you have.

How big is your sphere of influence, really?

Fake Follow Check will tell you, and anybody else who cares to search fro you, exactly how big it is. And how many fake accounts follow you. If you’ve a large percentage of fake accounts on your follow list, you’ll be perceived as having bought followers, and therefore a bit dubious at best. (Even though I did it myself, to prove a point).

I can see within seconds that @justinbieber, the most followed (and therefore, perceived as the most popular) person on Twitter, has 38,508,154 accounts receiving his tweets. Of which 34% are known fake accounts. and a further 29% are inactive accounts.

So while he does have 14,248,016 legitimate followers, his reported statistic is way off.

Before I start looking up to someone in business, I want to know how successful they are, and how many other people look up to them. This tool really shatters some illusions, but does help me spend my time and money more wisely. 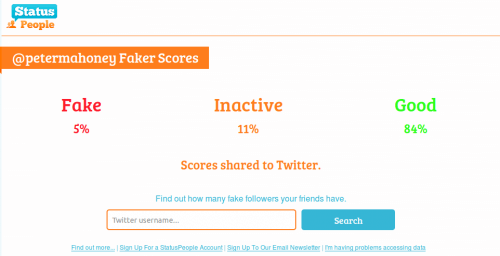