We’ve known for a long time that how fast your site loads is important for SEO.

Google have increased the importance of your website’s mobile speed when working out where to rank it.

It’s been true for a while that there’s been some small impact on your ranking based on mobile speed (desktop speed has been important for years) but now that’s been ramped up.

The most important metrics they use remain the sort of SEO work I do in the code and the quality of your content – but when those things are being looked after mobile speed is where you should turn your attention.

Unfortunately the automated tests out there tend to be a bit alarmist (I blogged about that recently) but they can still serve as a reminder that there’s nearly always room for improvement.

WordPress certainly has its issues with speed. And most themes are still being built for desktop-first (meaning how it looks on a desktop computer is the primary concern, and then it’s cut down and limited for mobile) when in fact current standards are clear that mobile-first should be the designers focus.

Be aware that although the testing systems are imperfect, and WordPress is very hard to score upwards of 80% with on most systems – the faster your site is the better.

In fact, mobile speed is now more important than desktop speed as a ranking metric for Google.

As a general piece of advice, my favourite tool for testing a site’s overall speed (not mobile specific) is Pingdom.

They give you a list of different servers to choose from; so it’s easier to get a real-world figure for your loading time in seconds – just like your target market will see it. Choose the nearest server to your primary audience, et voila. 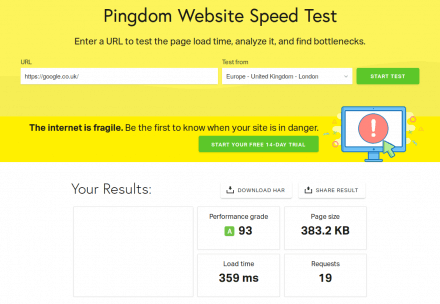 (Although none of the online speed testing tools are perfect, Pingdom has a lot of useful features.)